FOCUSSING AND CREATING – „CENTRES” 2019
Jörg Ahrnt
An installation with sherds collected by an archaeologist in Iran during the 1960ies.

By assembling the historical fragments into an installation, the archaeological material is lifted from the past and from its museum setting. Free from any scholarly processing, the fragments are placed into the perspective of a modern, occidental understanding of art.

Jörg Ahrnt (*1965) has been travelling to Iran for decades, fascinated by its long and multifaceted artistic tradition. He is in regular contact with the active contemporary art scene. But his approach and curiosity go even further. The artistic legacy and the history of research has caught his interest ever since. What was and what still is the meaning of searching for material from the past? What does a modern and rational perspective mean for the assessment, regard and value date of the object?

Sherds are both pieces of art and information carriers at the same time. In past cultures, pottery was mainly used for tableware. Dishes, bowls, jugs, pots and the like were produced in masses as they were in daily use, broke frequently and had to be replaced. For this reason, these remains of daily use are found in any archaeological context – even on the surface of historical sites and unexplored rural areas.

Clay is a primeval substance that man has made use of for thousands of years. To produce pottery objects, one needs the four classical elements earth, water, fire and air. According to the ancient Greek doctrine of the Four Elements, these substances are the basic essences of all matter. Both the Book of Genesis and the Koran tell us how God created Adam from clay. It is the substance that man soon utilized, learned to blend into the right ratio and process it under specific conditions to let his creativity take its course.

And the Lord God formed man of the dust of the ground, and breathed into his nostrils the breath of life; and man became a living soul (Genesis 2:7)

He it is Who created you from clay, then He decreed a term. And there is a term known to Him (Qur’an 6:2)

When throwing pottery on a potter’s wheel, a ball of clay has to be placed exactly in the center of the turntable. The wheel rotates while the solid ball of soft clay is pressed, squeezed and pulled gently upwards and outwards into a hollow shape. The first step of pressing the rough ball of clay downward and inward into perfect rotational symmetry is called centering the clay – a most important skill to master before continuing with the next steps: opening (making a centered hollow into the solid ball of clay), flooring (making the flat or rounded bottom inside the pot), throwing or pulling (drawing up and shaping the walls to an even thickness), and trimming or turning (removing excess clay to refine the shape or to create a foot).
Because of its inherent limitations, throwing can only be used to create wares with radial symmetry on a vertical axis and thus, with a center.

The shards from the Luschey Collection are placed on a black disc, forming a rhythm. As a geometric form the disc – which is a circle – has a center. Because each bottom sherd has a center, there are many centers on the disc, they are many and they are all designed. At the same time each sherd can be perceived as a single historical fragment.

„CIRCLES” 2019
Arabesque leave-like designs are drawn in meticulous detail. The fine ornaments recall Persian miniature painting of which the finest examples were drawn with one hair and reveal all their details only under a magnifier.
Ahrnt’s ink and brush drawings can be considered a continuation of the graphic works he created since 2012. Sharing their subtle and delicate ornamentation, the “circles” arise from a seemingly endless rapport of pattern units that prevail in his previous drawings, and reveal a circular structure. The displacement of the circles from the image center, again, emphasizes their significance.

The drawings are not framed in a traditional European way, behind glass. This presentation intensifies the sense of depth and three-dimensionality within the drawing, communicating to us more like a signal than an image. It allows us to focus on the optical effects of the drawing. This invites us to meditation through its lively depth. 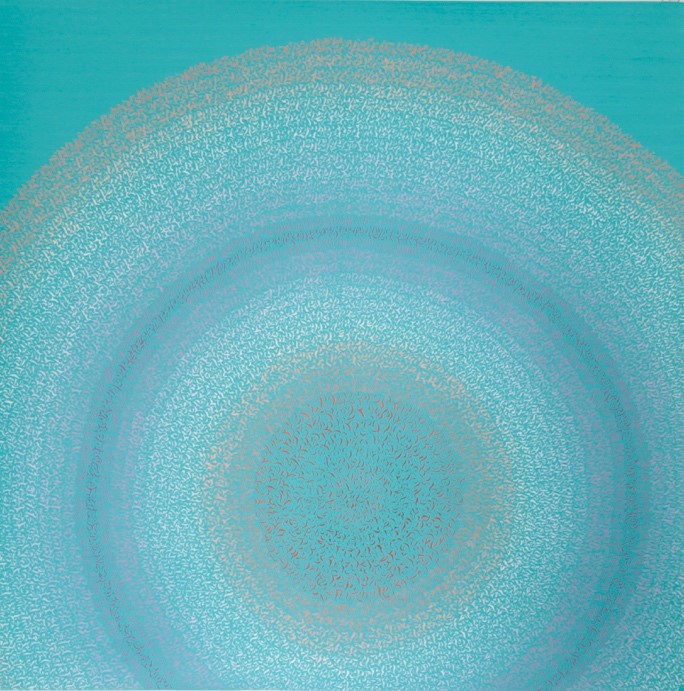